Large-scale coronavirus testing continues to lag and a vaccine could be at least one year away. But in the battle against world pandemic a rapidly expanding brigade of robots is answering an urgent call of duty: surface disinfection. 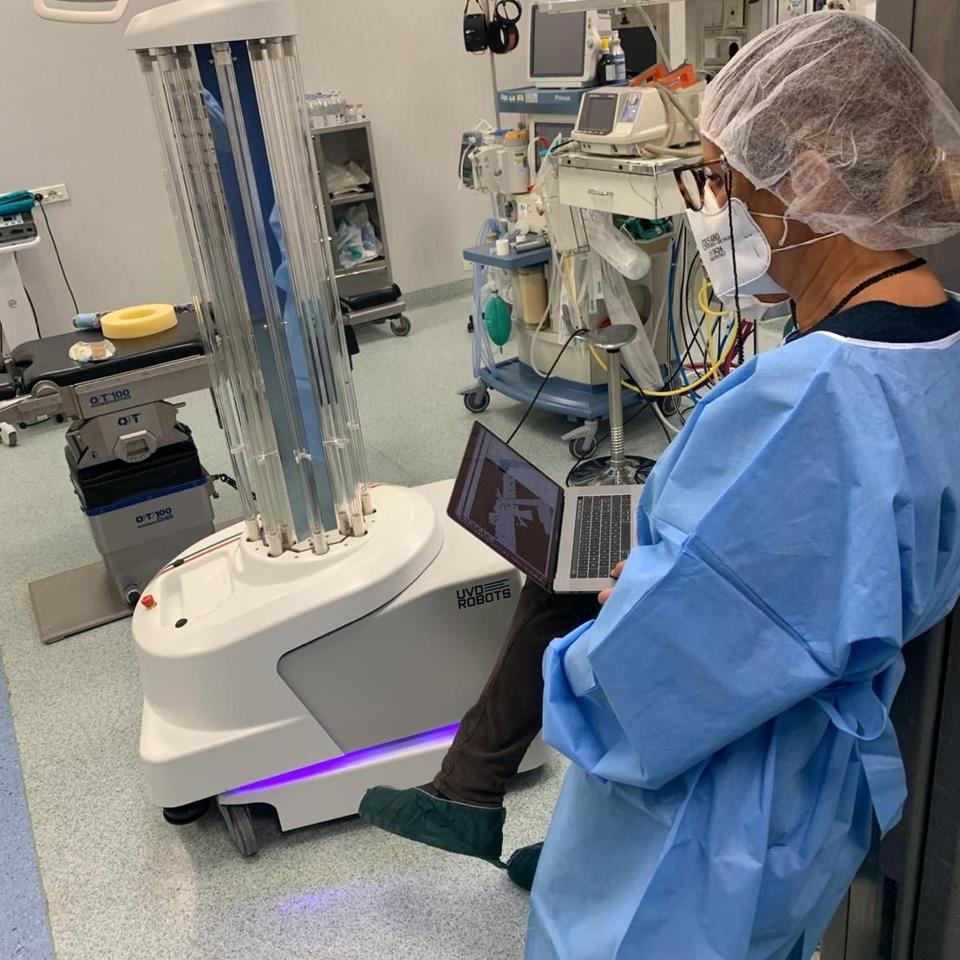 They’re rolling in by the hundreds and not just into hospitals and nursing homes but across a wide spectrum of public spaces, including government buildings, offices, hotels, airports and universities. Administrators of all stripes, desperate to keep people safe, are looking to a global robotics industry that has been quick to respond.

Denmark’s UVD Robots, a leader in fully autonomous ultraviolet-light-disinfection robots, shipped hundreds of them to China in February and hundreds more throughout Europe in March. A much smaller number have arrived in the U.S. but several hundred more are on the way, said UVD Robots’ CEO Per Juul Nielsen, speaking by telephone April 15.

“Hospitals around the world are waking up to autonomous disinfection,” Nielsen said. “We can’t build these robots fast enough.”

In San Antonio, Texas, Xenex, another leading provider of UV-light-zapping germicidal robots, has shipped hundreds of their LightStrike bots around the world, including to nearly 70 Veterans Administration hospitals in the U.S. and to ten sites run by the U.S. Department of Defense, Xenex CEO Morris Miller told CNBC earlier this week.

Healthcare-sector suppliers like UVD, Xenex and others still are a long way from being able to meet exploding global demand for automated disinfection solutions but it’s not just specialized service robots riding into battle.

Human-friendly industrial robots, also known as collaborative robots, are being shifted away from tasks, such as machine tending and warehouse rack-stacking, and redeployed in the war on coronavirus.

“In the mobile [robot] space, there are a huge amount of inbound [inquiries] surrounding [UV-light and chemical] disinfection,” said Melonee Wise, CEO of Fetch Robotics in San Jose, Calif.

Wise, in comments made during a recent webcast held by the Association for Advancing Automation (A3), said that her staff is fielding up to 20 leads a day, from representatives at companies and institutions, all wanting to know: “can you autonomously disinfect my facility?”

Earlier this month, a team of researchers at the USC Viterbi Center for Advanced Manufacturing, working intensely (while social distancing) for weeks, were able to retool a semi-autonomous mobile manipulator, a type of robot commonly used in small factories and warehouses.

Their resulting modification, the “ADAMMS-UV” robot, comprises three different hardware components. For a mobile base, the team used an Inspectorbots’ SuperMega Bot; mounted on that base is the UR5 arm from Universal Robots; on the arm, a Robotiq two-fingered gripper.

Then they fitted their creation with UV-light wands, augmented vision guidance and new software so it could learn detailed, dangerous disinfection tasks in places such as dorm rooms and offices, environments that are going to be difficult to clean thoroughly using purely autonomous mobile disinfection robots that do not have arms.

The USC team’s robot is paired with a human operator working remotely, making high-level decisions, such as pause, open that drawer.

“As a society we have a tremendous amount of work ahead of us to disinfect public spaces,” said Satyandra Gupta, the director of the USC Center for Advanced Manufacturing and the Smith International Professor of Mechanical Engineering and Computer Science.

Gupta’s group was responsible for making sure the robot works.

“This means we’ll need to apply all kinds of mobile robots – a lot of them,” Gupta said.

In recent weeks, Xenex has seen a surge in sales coming from their usual customers, such as hospitals and urgent care facilities, as well as a wide variety of office buildings, companies, government agencies and hotels.

Because the company has an international network of suppliers and distributors, it sensed, even in December, that a pandemic possibly was brewing. 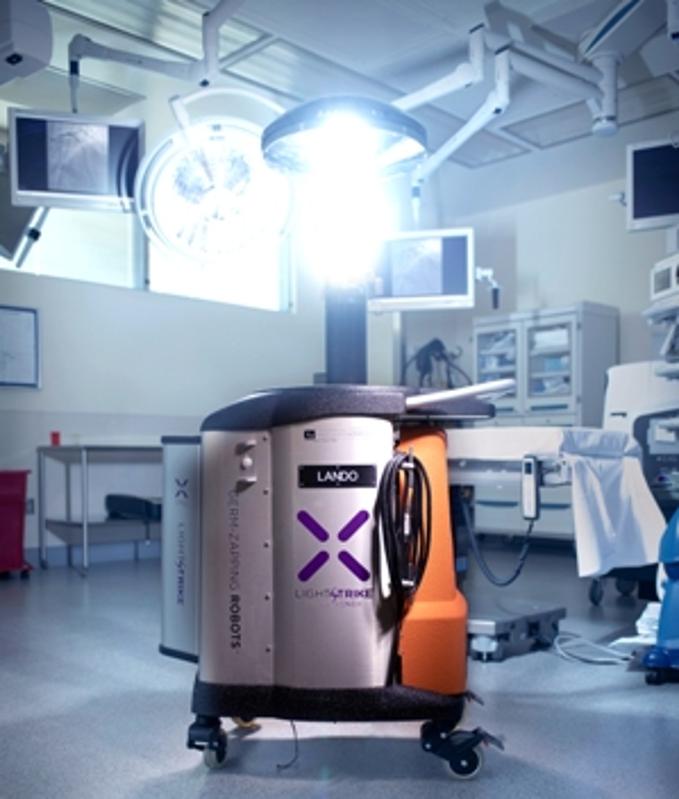 During January, as the virus spread around China, Xenex began ramping up production. Over a few days in February, they shipped dozens of robots to Italy.

“At any other time, we celebrate these wins,” Irene Hahn, VP-Sales, said in an email to colleagues after the big Italian order came in. “However, in light of what is happening, this one is different … we are absolutely humbled.”

All told, Xenex’s LightStrike robots have been deployed in more than 500 healthcare facilities worldwide.

Similarly, there’s been a surge of interest in competitor UVD Robots, capping a four-year mission to build, test and come to market with an autonomous mobile robot that can enter a room then safely disinfect it with UV-light.

UVD is owned by privately held Blue Ocean Robotics, known for its Robot Venture Factory in the Southern Denmark city of Odense.

Specializing in conceiving and commercializing problem-solving service robots, Blue Ocean finances the development phase, moving each viable robot line into its own subsidiary-venture company. Other portfolio holdings include GoBe Robots, a mobile telepresence robot for communication, social inclusion and CO2 reductions and PTR Robots, a mobile robot for safe patient handling and rehabilitation.

The market for service robots in general has been growing. Some 271,000 of these types of robots were sold globally last year, according to data from the International Federation of Robotics. That’s an increase of 61% over 2018.

Entering this year, UVD’s view was that more healthcare institutions were going to want their robots owing to something else starting to spread — greater awareness about the dangers of healthcare associated infections.

The UVD robot’s HAI-eradicating effectiveness — for example, being able to reduce an ICU room’s bacteria level by 80% — was clinically verified in 2018 at Odense University Hospital where units went through extensive tests involving all kinds of bacteria, fungi, and viruses, as well as tests relating to time of exposure, angles, shadowing effects, and reflections.

Then came a targeted marketing campaign, moving from one regional healthcare sector to the next, in Scandinavian countries and eventually throughout Europe. Robot sales were steadily rising in 2019. At the end of last year, UVD projected an ambitious 2020 growth rate target: 400%.

Put another way, when a three-figure order from China came in February, Nielsen explained, it meant the company had nearly sold more robots that single day than it had during its full first year of commercial viability.

In the Middle East, where decision making is more centralized relative to Europe and the U.S., “some countries’ leaders have just said, ‘we need 100 of these robots,’” said Claus Risager, co-founder and CEO of Blue Ocean Robotics, speaking to The Robot Report.

Imitators need to be scrutinized, Risager cautioned. “So many people are trying to copy the UVD robots,” he said. “There’s more to our product than putting light bulbs on a robot.”

“We’re now seeing how mobile robots can be deployed to safeguard people, which, hopefully is changing negative perceptions some people have about robots,” said Jeff Burnstein, A3’s President. “What these applications for disinfecting, protecting hospital personnel, and related tasks illustrate is that robotics is an important technology to assist people, not replace them.”

Prior to the pandemic, USC researchers had already created the Agile Dexterous Autonomous Mobile Manipulation System, or ADAMMS, to do cutting-edge machine tending tasks such as moving or loading parts or materials. In a large industrial setting, such tasks involve conveyor belts, autonomous guided vehicles and large robotic arms, overkill and too expensive for smaller manufacturers that still rely mainly on humans. The original ADAMMS was designed to be semi-autonomous with a video-game style interface so a human operator could give the bot high-level instructions, as needed.

Modifying ADAMMS to do a wider array of COVID-19 disinfection tasks, the USC team earlier this month rolled out ADAMMS-UV, which resembles a mini-airline-beverage cart on four sturdy tricycle-sized tires. It’s able to drive itself near objects of interest and manipulate them, so as to reach spaces that can’t be treated by UV sources mounted on a mobile base. A depth camera is affixed to the wrist of the robotic arm and there are multiple cameras on the sides of the base, providing situational awareness for the operator who can take control at any time.

“Keeping a human in the loop is required,” said Hyojeong Kim, a student on the team. “In a cluttered area, a robot might need some guidance.”

UV light is a proven disinfectant. Coronavirus on a surface can be killed when exposed to UV light of sufficient intensity for an appropriate amount of time. The robot can hold the UV wand over a surface and move it at the right speed, meticulously, consistently, without any mistakes, in a manner that a human would find pretty much impossible.

“We know hospitals are already using mobile robots with a UV column to perform disinfection,” said Pradeep Rajendran, a post-doctoral student on the USC team. “Every surface in the line of sight can be sanitized using this method. But dorms include hard to reach areas UV light won’t reach.”

Eventually, a two-armed disinfection robot will be perfected, Gupta predicted, hinting at his team’s next project.

Hazardous-duty mobile robot systems have been around for decades. Soldiers and first responders use them to diffuse bombs, rip open vehicles and sniff out toxic chemicals. Northrop Grumman Remotec has been a leader in this space since the 1990s when it built a robot that could remove radioactive materials from government research labs.

The first nuclear material handling robot was created by the mechanical engineering team at General Mills when the food-making giant was repurposed for secret weapon production during the Second World War in what essentially was a Minneapolis version of the Manhattan Project.

Around the same time, General Mills engineers created the “Little Ranger,” considered to be among the earliest mobile remote manipulators.

In 1961, the mechanical division was spun off from General Mills as Programmed and Remote Systems Corporation, which today is PaR Systems, makers of automated manufacturing and material handling equipment.

After selling Unimation to Westinghouse in 1982, Engelberger spent the rest of his life working on service robotics. He founded Transitions Research Corporation, a think tank company doing research funded by NASA. The Johnson Space Center backed its creation of a two-armed, mobile robotic courier that was later repurposed for use in hospitals allowing nursing staffers to be redirected to more valuable roles. Transitions Research eventually went public, becoming HelpMate Robotics.

“Engelberger was putting robots in hospitals back in the 1990s,” A3’s Burnstein said.

Right up until the time of his death in 2015, Engelberger talked about his vision of the future of automation.

“He saw a world in which people and robots work together to help humanity,” Burnstein said. “Now we’re really seeing it. Joe would be proud.”

A new market growth opportunity, start up business in mexico!

If you would like to find out more about this topic or are interested in receiving a complimentary business case analysis for your operation in Mexico, please fill out this form or contact us at:

Ford Mexico begins production of the 2021 Bronco Sport in Sonora